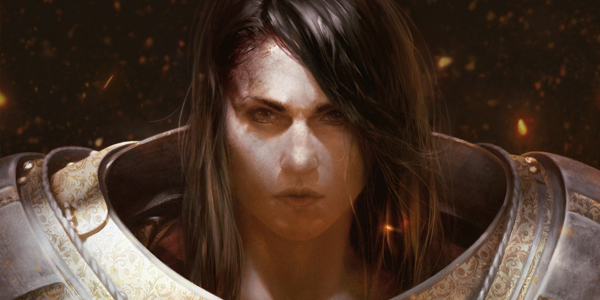 “In a world where any act of magic could open a portal to hell, the Order insures that no wizard will live to summon devils, and will kill as many innocent people as they must to prevent that greater horror. After witnessing a horrendous slaughter, the village girl Heloise opposes the Order, and risks bringing their wrath down on herself, her family, and her village.” (via Goodreads) 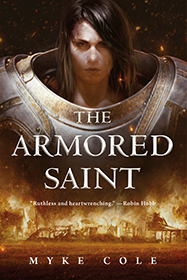 TBH, The Armored Saint wasn’t my favorite read of 2018 – but it also wasn’t the worst. More than anything, I’m a character person. I can sit through shoddy storytelling, boring settings, and lackluster plots if I like the main characters. It’s a skill acquired after years of reading trashy yet fabulous paranormal romance.

The Armored Saint has a lot of good things going for it, but Myke Cole’s protagonist, Heloise, is not one of them. She doesn’t so much make choices as acts without thinking then immediately regrets her impulsiveness. As the hero, she doesn’t seem to really develop. She’s recklessly confrontational at the beginning, and recklessly confrontational at the end. Things just sorta happen to her and she reacts, often in the most myopic and heedless way possible. Sometimes she makes a choice, but it’s usually her choosing to do something she knows will only make things worse but isn’t willing to wait for a better strategy. Some of her poor decision making behavior can be chalked up to her being a sheltered 16-year-old, but mostly it’s just Cole. She’s more Strong Female Character than anything.

Where The Armored Saint falters on character, it soars on worldbuilding and atmosphere. Every minute detail of Cole’s world – from the religion to the scene locations to the rules of magic to the socio-political hierarchy – is utterly enthralling. The tone, too, packs a wallop. It’s intense, dark, and often frightening. When we finally witness the villagers participating in a Knitting, it’s cruel, brutal act of violence perfectly portrayed. I’ve never read Cole’s work before, but if this is what he can do with other worldly fantasy, I bet his military fantasy is pretty great.

Although I didn’t love The Armored Saint, the real question is whether I plan on reading the rest of the trilogy. I think the answer is “yes.” There were more than enough intriguing elements to make up for the clunkier bits. And although Heloise as a protagonist didn’t do much for me, I’m curious to see if she’ll wisen up and where her journey might take her. There are a lot of ways for The Sacred Throne series to resolve itself, and I’d like to be there when it does.

Heloise didn’t scream this time. She had no screaming left in her. The sickness was a low buzz in her belly. Her arms and legs felt weak and heavy. She closed her eyes, but it didn’t stop her ears, which heard the wet crunch as the Pilgrim brought the flail down again, and again, and again.

There was silence, then. The crackle of flames behind Heloise were almost soothing, warming her shoulders, the back of her neck.

Crunching of boots, a shadow falling on her. “You let her go.”

Thanks to Tor.com for sending me a review copy.