“Nix has spent her entire life aboard her father’s ship, sailing across the centuries, across the world, across myth and imagination.

As long as her father has a map for it, he can sail to any time, any place, real or imagined: nineteenth-century China, the land from One Thousand and One Nights, a mythic version of Africa. Along the way they have found crewmates and friends, and even a disarming thief who could come to mean much more to Nix.

But the end to it all looms closer every day.

Her father is obsessed with obtaining the one map, 1868 Honolulu, that could take him back to his lost love, Nix’s mother. Even though getting it—and going there—could erase Nix’s very existence.

For the first time, Nix is entering unknown waters.

She could find herself, find her family, find her own fantastical ability, her own epic love.

Or she could disappear.” (via Goodreads) 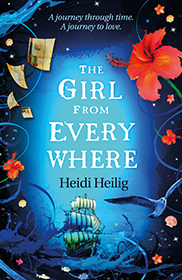 Nix has had a hard yet exciting life. Growing up on a time-travelling ship is one thing, being raised by a father hellbent on finding the one map that may erase her entire existence is another. It’s not that Slate is a bad man. He’s just so caught up in finding his way back to the woman he loves that he can’t see anything else. Slate is a Navigator, meaning he can travel across space and time to visit any location, real or fictional, as long as he has a well-drawn map contemporary to the era. The catch is he can only travel there once. If he wants to revisit a place, such as 1868 Honolulu, he must find another map drawn as close to that date as possible. Easier said than done. Even though Nix is his first mate, he hasn’t yet taught her how to Navigate. She relies on him as much as he relies on her – he’s bipolar and when he has bad spells she takes over the ship and cares for him – but if she learns to Navigate, she has one less reason to stay on the Temptation.

Nix, in all her glorious complexity, is the best part of The Girl From Everywhere. She’s fire and ice and everything nice. She’s a girl riddled with misplaced guilt but who is also independent and confident. She’s brave and bold but caves in the face of her father’s needs. She’s too smart by half, so much so that she can’t see that the best things in life are already right in front of her. Nix is hands down one of my all-time favorite characters from any book ever.

There’s so much good representation in this novel. Besides Slate’s mental health issues, Nix is Hapa (a Hawaiian word for someone from who is half white and half Asian or Pacific Islander) and the rest of the crew is wonderfully diverse in terms of race and sexual identity.

The plot is action-packed and riveting, full of distractions and diversions and double-crossings. And Heidi Heilig is an incredible writer of vivid and evocative description. Nix and co. visit amazing times and places, and Heilig immerses you in the scenes, from scents to tastes to textures to sounds, it all comes to life. I couldn’t put this book down. Reading The Girl From Everywhere was a delight from top to bottom.

He was stringing the jack line and he didn’t look up, but by his face, I knew he’d heard me.

Check out my review of the entire duology over on Tor.com.