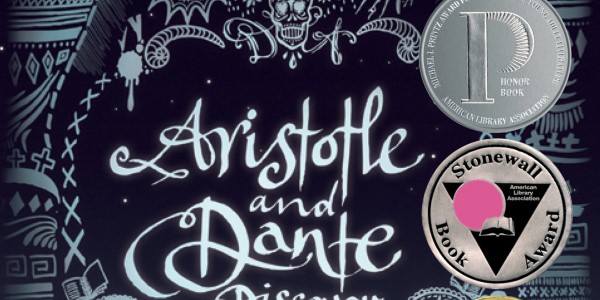 “Aristotle is an angry teen with a brother in prison. Dante is a know-it-all who has an unusual way of looking at the world. When the two meet at the swimming pool, they seem to have nothing in common. But as the loners start spending time together, they discover that they share a special friendship—the kind that changes lives and lasts a lifetime. And it is through this friendship that Ari and Dante will learn the most important truths about themselves and the kind of people they want to be.” (via Goodreads)

Ari is bored, lonely, and frustrated with literally everything. With the summer stretching out endlessly ahead and little to fill it, he takes a job flipping burgers. His mother loves him deeply, but cannot relate to him the way she used to. His father is lost to the nightmares of the Vietnam war. And as a Mexican American teen, he feels distant from his peers. Until he meets Dante, a quirky boy from another school. Dante opens Ari’s mind to new experiences and sensations. As the two grow closer, conflicts in his homelife and confusion in his own threaten to destabilize his bond.

Like They Both Die at the End, Aristotle and Dante is a third about two boys falling in love and two-thirds about young men growing up and learning to navigate the messiness of the world around them. The setting, 1980s El Paso, Texas, knocks the reader out of their comfort zone a bit, but allows for the story arc in a way a contemporary big city wouldn’t.

The writing itself is as exquisite as the story. Benjamin Alire Sáenz is a deliberate, impactful writer. In a single sentence he can convey a universe of conflicting and complementary ideas. He drags you into Ari’s mind so deeply that you feel what he’s feeling. The rest of the characters – especially Dante – are just as vivid and realistic as Ari. Not a one is two dimensional or superfluous. As someone who reads a substantial amount of books every year, lemme tell you how rare a feat something like that is. Each moment, each character, each description means something and builds on the last. Powerful, heartbreaking stuff.

Aristotle and Dante Discover the Secrets of the Universe is one of those books everyone should read. I have recommended it to so many people so many times over the years that I’ve lost count. It’s beautiful, it’s inspiring, it’s devastating. It’s real in a way few novels are. It’s a hug and a punch and a scream and a wail all wrapped into one searing story. I never cry reading books, but damn if I didn’t with this one.

She shook her head. “Are you going to spend your life beating up on yourself?”

“In transition? What kind of a Mexican mother are you?”

“I’m an educated woman. That doesn’t un-Mexicanize me, Ari.”

She sounded a little angry. I loved her anger and wished I had more of it. Her anger was different than mine or my father’s. Her anger didn’t paralyze her. “Okay, I get your point, Mom.”

“Somehow, Mom, I always feel like a case study around you.”

“Sorry,” she said. Though she wasn’t.