“Nettie Lonesome lives in a land of hard people and hard ground dusted with sand. She’s a half-breed who dresses like a boy, raised by folks who don’t call her a slave but use her like one. She knows of nothing else. That is, until the day a stranger attacks her. When nothing, not even a sickle to the eye can stop him, Nettie stabs him through the heart with a chunk of wood and he turns to black sand.

But her newfound sight is a blessing and a curse. Even if she doesn’t understand what’s under her own skin, she can sense what everyone else is hiding—at least physically. The world is full of evil, and now she knows the source of all the sand in the desert. Haunted by the spirits, Nettie has no choice but to set out on a quest that might lead her to find her true kin . . . if the monsters along the way don’t kill her first.” (via Goodreads) 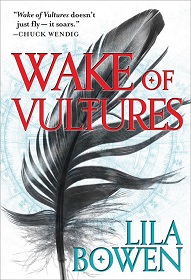 Now, I must say I don’t generally read books about marginalized people written by those part of the majority. As a cishet white woman Lila Bowen (aka Delilah Dawson) is definitely in the majority. Needless to say, I went into Wake of Vultures with some strong reservations about reading a book about a Black and Indigenous trans man written by someone who is as far away from #ownvoices as it gets. While Bowen doesn’t get everything right, she doesn’t get that much terribly wrong, either. I’m not sure what the point of having any Black ancestry is, since it has no bearings to the plot, her worldview, or anything else. I’m unclear as to whether or not this fantasy version of Texas is a free or slave state – or if there’s even a United States at all. Also unclear if Nettie is actually legally enslaved or if she’s merely stuck somewhere she doesn’t know how to escape from. And yes, there is a massive difference. Regardless this is a world where racism exists, and to not do much with a whole half of her ancestry is disappointing to say the least.

I don’t usually do spoilers in reviews, but I need to talk about queerness and can’t do that without bringing up events that don’t take place until later on in the series. In Wake of Vultures, Nettie identifies as female at first, and by the end she’s clearly questioning that gender identity. She’s enjoyed her time as Rhett more than she expected. Some of that is the freedom of not being boxed into gender stereotypes of what women are expected to be and required to do.

But there’s another layer there which she is only just beginning to explore of maybe she likes being Rhett so much because she really is a boy. In the beginning, Nettie has had no experience of gender or sexual nonconformity. To go through both at once – she’s also discovering she’s attracted to both men and women – makes the self-labeling process a lot slower than some readers might prefer. Nettie’s whole world is thrown upside down, but eventually Rhett becomes his dominant identity and the past is left behind. So while Wake of Vultures is not about a trans man, the Shadow series is. Rhett is on a journey, one he’ll make at his own pace.

Back to the book at hand. Wake of Vultures is a fun read full of dangerous action and creative worldbuilding. Technically it’s not young adult, but to me it reads like YA, and I mean that in a good way. The monsters are frightening, the characters charming, and the central mystery intriguing. Nettie is a complicated main character, one determined to be left alone yet desperate for companionship. Her walls have walls, but once you get through the fortress of tough talk and hard attitudes there’s a sweet boy eager to find his place in the world.

For my review of the Shadow series (books 1-3), head over on Tor.com.

A figure peeled away from the barn, jerky-thin and slithery in a too-short coat with buttons that glinted like extra stars. The man’s hat was pulled low, his brown hair overshaggy and his lily-white hand on his gun in a manner both unfriendly and relaxed that Nettie found insulting.

“You best run off, mister. Pap don’t like strangers on his land, especially when he’s only a bottle in. If it’s horses you want, we ain’t got none worth selling. If you want work and you’re dumb and blind, best come back in the morning when he’s slept off the mezcal.”

“I wouldn’t work for that good-for-nothing piss-pot even if I needed work.”

The stranger switched sides with his toothpick and looked Nettie up and down like a horse he was thinking about stealing. Her fist tightened on the whip handle, her fingers going cold. She wouldn’t defend Pap or his land or his sorry excuses for cattle, but she’d defend the only thing other than Blue that mostly belonged to her. Men had been pawing at her for two years now, and nobody’d yet come close to reaching her soft parts, not even Pap.

“Then you’d best move on, mister.”

The feller spit his toothpick out on the ground and took a step forward, all quiet-like because he wore no spurs. And that was Nettie’s first clue that he wasn’t what he seemed.

Thanks to Orbit for sending me a review copy.