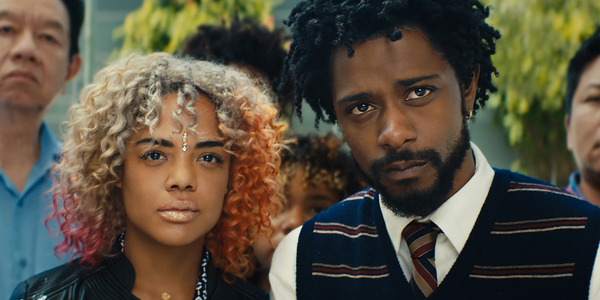 The plot of the film hinges on the concept of the white voice. No, Riley did not make it up. Many POC really do employ a white voice and code-switch when in predominately white spaces. It’s important to note this reality, because to look at Cash, Langston, Detroit, and Mr. Blank’s use of white voice as simply a disconcerting joke misses the whole damn point. The film’s Black characters only make money when mimicking white voices, and only become upwardly mobile when acting like white folks.

Cash and Mr. Blank put the white man costume on so often that they forget they’re wearing it. It’s no coincidence that Mr. Blank wears clothing that nods at particular kind of whiteness—the bowler hat, waistcoat, and mutton chops hearken back to nineteenth-century capitalists and robber barons, not to mention his dress shirt with a pattern reminiscent of a trademark Carlton Banks sweater. Hell, Mr. Blank is so deeply immersed in his costume/role that the film even denies him a name: no identity, no truth, just an iron mask he can never remove. When Cash initially upgrades his wardrobe, his old-school suit fits awkwardly, and is a kaleidoscope of odd colors and patterns. He’s far less comfortable in his costume than Mr. Blank, even if he doesn’t realize it. But he quickly adapts and switches to tailored suits. He has no qualms about screwing his friends over for money until suddenly he does…but only when he realizes that doing so directly affects him in a negative way.

Or, to put it another way, Cash can pretend he’s as white as he sounds until an actual white man reminds him that he’s still Black. Because that’s the thing about Cash—as he keeps telling the white folks, he isn’t “that” kind of Black man. He can’t rap, has never shot anyone, lives in a middle-class neighborhood with lawns and single-family homes, and wears hand-me-down sweater vests. Cash doesn’t fit white folks’ stereotype of what a Black man is, which makes it all the easier for him to move up in the ranks. When he’s simply a lowly telemarketer, his white supervisor Diana DeBauchery (Kate Berlant) barely looks at him, but once she sees him moving in the same circles as successful white folks she can barely keep her hands off him. No wonder Cash let himself be seduced RegalView: How intoxicating it must be, not only to be suddenly rich, but to find yourself moving in circles that people like him are traditionally excluded from, to feel like you now have power (even if it’s only an illusion). Is it worth sacrificing his soul over? Maybe…

For the rest of my review, head over to Tor.com.