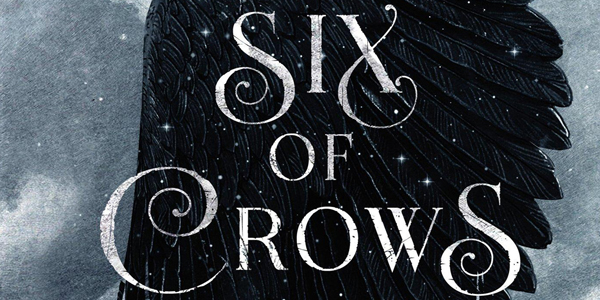 “Ketterdam: a bustling hub of international trade where anything can be had for the right price–and no one knows that better than criminal prodigy Kaz Brekker. Kaz is offered a chance at a deadly heist that could make him rich beyond his wildest dreams. But he can’t pull it off alone…

A convict with a thirst for revenge.

A sharpshooter who can’t walk away from a wager.

A runaway with a privileged past.

A spy known as the Wraith.

A Heartrender using her magic to survive the slums.

A thief with a gift for unlikely escapes.

Six dangerous outcasts. One impossible heist. Kaz’s crew is the only thing that might stand between the world and destruction—if they don’t kill each other first.” (via Goodreads)

Diverse young adult fantasy heist tale? Yes please! Kaz Brekker is the leader of the Dregs, a local gang in the rough-and-tumble island city-state of Ketterdam. With his fearsome reputation and brilliantly strategic mind, Kaz maintains an iron fist around his corner of the Barrel, the unsavoury part of town where all the gambling halls and prostitution dens are. A powerful merchant offers Kaz an opportunity his hubris and burning desire for vengeance against the man who caused his brother’s death won’t allow him to refuse. Not once but twice they must break into and out of impenetrable prisons. Easier said than done.

Joining him are five other criminals, each with their own motivations. Brown-skinned sleuth and master climber Inej dreams of paying off her indenture and securing her freedom once more. Will she return to her acrobat parents who probably think she’s dead, or set sail as the captain of her own ship? Jesper, dark-skinned and full of secrets, let his gambling addiction get the better of him. He needs this payout to save his father’s farm, which he lost in a bet. Nina, fat and vivacious, longs for freedom from indenture as well. She was once a rebel in a deadly civil war and is eager to return to her comrades. Matthias knows the only way to clear his name and return home is to betray his nation. But he did that once already when he saved Nina’s life. Lastly, Waylan, the son of the mercher who hired the crew. He may be wet behind the ears, but has hidden depths. And there’s a queer flirtation that looks like it will become something more in the next book.

Each of the nations are inspired by the real world: Kerch as Holland and Ketterdam as Amsterdam, Fjerda as the Nordic countries, Ravka as Russia, the Kaelish of the Wandering Isle as Ireland, Shu Han as China, and Novyi Zem as both Australia and the American colonies. To me, it looks like Leigh Bardugo made brown people the stand-in for white colonizers. Which, no.

Since we’re on the topic of things that didn’t sit well with me, let’s talk about the relationship between Nina and Matthias. Both are fascinating characters with a complex, fraught relationship. But what ruined it for me was that relationship being romantic/sexual rather than platonic. Mild spoilers here, but Matthias and Nina are enemies. Like, serious enemies. Matthias’ people, the Fjerdans, don’t just hate Grisha, they enslave, torture, and kill Grisha for the crime of existing, and go so far as to travel to other lands to capture Grisha. There are hints of African enslavement, the Holocaust, and American extermination campaigns against Indigenous people, and that’s where my squick kicks in. It’s one thing to have the oppressor become friends with the person he oppresses as a means to unlearn what his society teaches. But it’s a whole ‘nother issue to have the enslaved and the slaver want to bone each other. In the former situation, Matthias’ contempt for his society’s behavior would arise out of him discovering empathy for the Grisha, whereas in the latter option Bardugo went for, his conflict is rooted in his sexual desire for a being he considers less than human. That difference is key because it means Matthias’ does what he does at the Ice Court not to take on a corrupt system but because he likes Nina specifically. He does not reconsider his opinions of Grisha as a whole, nor does he recognize his privilege and his people’s prosperity was built on a foundation of enslavement and abuse. It’s problematic to say the least.

Setting aside the discomfiting undertones of Nina and Matthias’ relationship, Six of Crows is ultimately an entertaining, exciting novel. I couldn’t put it down, it was so engaging. Bardugo is a helluva writer. She knows how to craft characters that are intriguing and unique. And she’s one of the few disability #ownvoices YA authors out there. It’s not often we get to have a disabled main character, especially one as awesome (and intimidating) as Kaz. Although I disliked a fairly important element of the novel, I don’t regret reading it. Nor has my interest in continuing with the series waned (much). If that’s not a testament to Bardugo’s talent, I don’t know what is.

Kaz Brekker didn’t need a reason. Those were the words whispered on the streets of Ketterdam, in the taverns and coffeehouses, in the dark and bleeding alleys of the pleasure district known as the Barrel. The boy they called Dirtyhands didn’t need a reason any more than he needed permission – to break a leg, sever an alliance, or change a man’s fortunes with the turn of a card.

Of course they were wrong, Inej considered as she crossed the bridge over the black waters of the Beurscanal to the deserted main square that fronted the Exchange. Every act of violence was deliberate, and every favour came with enough strings attached to stage a puppet show. Kaz always had his reasons. Inej could just never be sure they were good ones. Especially tonight.

2 thoughts on “Review: “Six of Crows” by Leigh Bardugo”