“Following her time in the clutches of Darth Vader, Doctor Aphra has barely escaped with her life. If the Dark Lord of the Sith ever learns of her survival, he’ll hunt her to the ends of the galaxy. But for now, it’s time for a return to what she does best. With droids Triple-Zero and BeeTee-One in tow, she’s off in search of rare artifacts from the galactic center to the Outer Rim — and everywhere in between. Aphra’s got debts to pay, after all. Just as long as she can stay one step ahead of the Empire, some bounty hunters…and just about everyone else in the galaxy!” (via back cover of vol. 1) 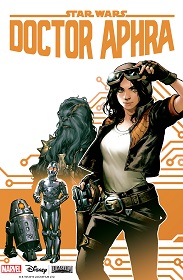 As with any series as long-running as Aphra, the quality fluctuates. Luckily, it’s mostly good on all fronts. Artist Kev Walker does a lovely job highlighting the characters expressions and portraying the emotional tone set by writers Kieron Gillen and Si Spurrier. He picks interesting angles to highlight, and the detail work is fab. The lettering, handled by Joe Caramagna, is solid. I also loved the distinctions between characters like Rur and Black Krrsantan. Antonio Fabela and Rachelle Rosenberg’s sharp, bright colors are probably my favorite of the bunch. The colors are as playful and daring as Aphra is, and are the perfect fit for a universe as vivid as Star Wars.

As interesting as the stories are, it’s really the interactions between the characters that make the whole thing work. Carving complex relationships out of wacky SFF premises is one of Gillen’s greatest talents, one that’s on full display in Doctor Aphra. Through her rocky relationship with her father, we better understand her behavior. Dealing with Triple Zero and BeeTee push her amorality to its limits. Her tempestuous flirtation with Tolvan reveal her need for recognition and companionship. Aphra is about as antihero as it gets. Despite ample opportunities to redeem herself and side with the good guys, she repeatedly and willingly chooses herself. She isn’t evil, but any good she does is coincidental to the scheme she’s concocted to get herself out of whatever pickle she’s currently in. This is Aphra’s universe, we all just live in it…

Do the world a favor and buy this from your local comic book store or borrow it from your public library.

Follow Punk-Ass Book Jockey on WordPress.com
On this day last year, I drove 5 hours round trip to adopt this very cute little boy. He's had a tumultuous year, health-wise (thanks to a shitty breeder), but being thoroughly spoiled has certainly made it easier.
Yet again Oliver is feeling poorly, but at least he still looks cute when he dreams.
Read 2 hella excellent novellas this weekend. Put these on your #TBR immediately. 📚: RIOT BABY by Tochi Onyebuchi and UPRIGHT WOMEN WANTED by Sarah Gailey. ... #books #BookRecommendations #bookish #dystopia #dystopian #tordotcompublishing #tornovellas #bibliophile #read #igreads
Oliver's dislike of change was finally overruled by his love of snoozing on me. After a few hours of snobbily rejecting my new couch he climbed onto my lap and promptly fell asleep.
My Tweets