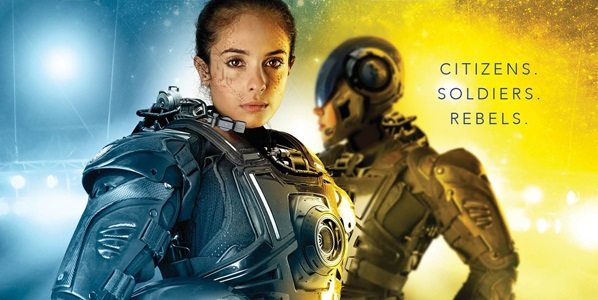 “Aisha Un-Haad would do anything for her family. When her brother contracts a plague, she knows her janitor’s salary isn’t enough to fund his treatment. So she volunteers to become a Scela, a mechanically enhanced soldier sworn to protect and serve the governing body of the Fleet, the collective of starships they call home. If Aisha can survive the harrowing modifications and earn an elite place in the Scela ranks, she may be able to save her brother.

Key Tanaka awakens in a Scela body with only hazy memories of her life before. She knows she’s from the privileged end of the Fleet, but she has no recollection of why she chose to give up a life of luxury to become a hulking cyborg soldier. If she can make it through the training, she might have a shot at recovering her missing past.

In a unit of new recruits vying for top placement, Aisha’s and Key’s paths collide, and the two must learn to work together–a tall order for girls from opposite ends of the Fleet. But a rebellion is stirring, pitting those who yearn for independence from the Fleet against a government struggling to maintain unity.

With violence brewing and dark secrets surfacing, Aisha and Key find themselves questioning their loyalties. They will have to put aside their differences, though, if they want to keep humanity from tearing itself apart.” (via Goodreads) 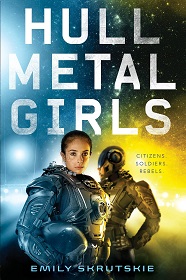 What Hullmetal Girls does best is diversity. There’s class differences, obviously. The majority of the characters appear to be Asian and Middle Eastern. Aisha is a deeply religious even though it conflicts with her Scela enhancements. Out of the quartet, only one is cishet; the others are pansexual, trans and straight, and asexual and aromantic. There is a missed opportunity to include disabilities and mental health issues, but frankly the same could be said about just about every YA book.

Queerness often operates as a plot point in fiction, and by doing so it sets up a situation where being queer is the only thing the character is allowed to be. Intersectionality is sacrificed rather than blended in. Fortunately that is not an issue here. No one shames the queer characters, makes offensive comments, demands justifications or explanations, or tries to “fix” them. For Aisha, her religious and class identities have larger impacts on her relationship with the Scela exo—and therefore the main plot—than her sexual, romantic, or racial/ethnic identities, although all are part of who she is…

“We can’t sedate you for this part,” the female technician reminds me. Something in her voice tells me she wishes it were otherwise. I wonder how many times she’s watched this process. “Neural integration relies on full consciousness,” she continues. “The exo has to get to know you so it can calibrate. Kinda like a handshake. Once that’s done, we’ll numb you down for the rest.”

A clamp settles over my head, and the saddle tilts until I’m staring at that drain in the floor. I wonder how much of me is going to end up flowing through it.

Thanks to Delacorte for sending me a review copy.

Do the world a favor and buy this from an indie bookstore or borrow it from your local public library.