“When Babe arrives at Hogget Farm, Mrs. Hogget’s thoughts turn to sizzling bacon and juicy pork chops—until he reveals a surprising talent for sheepherding, that is. Before long, Babe is handling Farmer Hogget’s flock better than any sheepdog ever could. Babe is so good, in fact, that the farmer enters him into the Grand Challenge Sheepdog Trials. Will it take a miracle for Babe to win?” (via Goodreads) 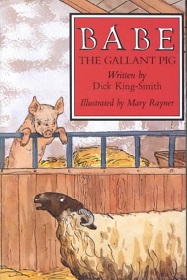 Sometimes when life gets rough you just want to read something awash in nostalgia. Which is why I recently went back and re-read some of my favorite childhood books, including Babe: The Gallant Pig.

Now, to be fair, I was about 13 or 14 when I first read it. It was not long after the movie came out on VHS, a copy of which I owned and watched again and again and again. Young adult fiction had not yet made its way into my local library, and the children’s librarian had long-since kicked me out of the section saying I was too old to be reading kids’ books. Frustratingly, the librarians in the adult fiction section prohibited me from checking out any of those books, insisting I was too young. This was in the days before online catalogues (hell, we had only just gotten a personal computer and still relied on AOL for internet access), so the only way to get a book was to physically go and get the book. I waited until the children’s librarian left her desk and snuck in, grabbed Babe off the shelf, and hid in the reading area. For one glorious hour, I sank into the wondrous world created by Dick King-Smith, then snuck back out before the librarian spotted me on her reshelving rounds. Every few years since then, I re-read Babe, and this is one of those times. Followers, it was just as good as I remembered.

Babe the book follows a similar arc as Babe the movie – Farmer Hogget rescues a piglet, sheepdog Fly takes a shine to him and teaches him to herd, Babe stops rustlers, Hogget almost shoots him after Ma dies, Babe wins the sheepdog trials. Characters like Ferdinand and Rex were additions to the film. The book is bare-bones, and delightfully so. Babe learns the value of hard work and being polite, Fly and the sheep learn to respect those who are different from them and to not be taken in by bigotry, and Hogget learns to have faith in others.

King-Smith writes with a clearly and straightforward, like he’s speaking with a child rather than to them. Despite the simplistic style, between his perfectly chosen words and Mary Rayner’s lovely illustrations, we have a keen sense of what Babe’s world is like. Even at 35-years-old, I found myself sinking back into the romance of the English countryside. I could almost smell the grassy fields, hear the bleating sheep, and feel Babe’s wet snout.

The novel isn’t great about it’s sole female character – Mrs. Hogget is a flighty chatterbox who is kind but not respected by her husband or the author – but it was written in the early 1980s by an old white English farmer, so I’ll cut it some slack.

I haven’t decided if I will ever have children (and by “have” I mean adopt/foster, because being pregnant sounds like the worst thing to ever happen to anyone), but if I do, I will definitely read this book with them.

By the pen sat the Vicar, notebook in hand, a cardboard box on the table in front of him. On the pen hung a notice – “Guess my weight. Ten pence a shot.” Inside was a little pig.

As Farmer Hogget watched, a man leaned over and picked it out of the pen. He hefted it in both hands, frowning and pursing his lips in a considering way, while all the time the piglet struggled madly and yelled blue murder. The moment it was put down, it stopped. Its eyes, bright intelligent eyes, met the farmer’s. They regarded one another.

One saw a tall thin brown-faced man with very long legs, and the other saw a small fat pinky-white animal with very short ones.

Do the world a favor and buy this from an indie bookstore or get it from your local public library.

Follow Punk-Ass Book Jockey on WordPress.com
The boys have figured out how to climb to the top of their cage...but not how to climb back down.
Bought so many new books for my school library last night!
Beautiful bookmail! Link in profile for the full list and descriptions.
When you're waiting for dinner but you're also sleepy.
My Tweets
Loading Comments...
%d bloggers like this: