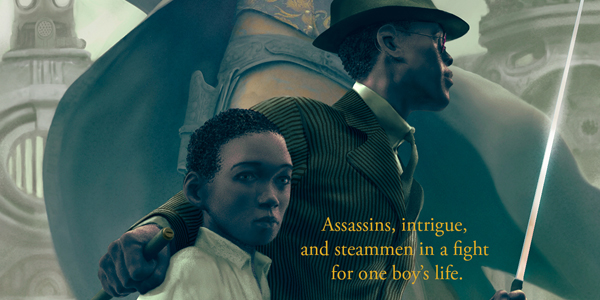 “Having stumbled onto a plot within his homeland of Jamaica, former espionage agent, Desmond Coke, finds himself caught between warring religious and political factions, all vying for control of a mysterious boy named Lij Tafari.

Wanting the boy to have a chance to live a free life, Desmond assumes responsibility for him and they flee. But a dogged enemy agent remains ever on their heels, desperate to obtain the secrets held within Lij for her employer alone.

Assassins, intrigue, and steammen stand between Desmond and Lij as they search for a place to call home in a North America that could have been.” (via Goodreads) 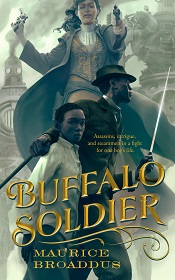 Buffalo Soldier is a story about stories. The stories we tell ourselves, the stories we tell others, stories that hold our history and culture, stories that help us find our place in the world. Just as Desmond uses Maroon mythology to keep Lij grounded in his past, so too does Broaddus in using the science fiction genre as a tool for exploring the philosophies and social mores of the real world. It’s not just a steampunk novella with a majority Black and brown cast. Through the genre lens, Broaddus comments on the real world. Racism, white privilege, the uniquely white American form of conquest and domination (i.e.: Manifest Destiny), and intersectional feminism all get play. Power – who has it, who doesn’t, those who use it to exploit and abuse others, and those who fight back against it – is the name of the game.

It’s telling that the villains of the piece are white and the heroes PoC; that the main antagonist is a poor woman who falsely believes the wealthy white man who employs her has her best interests at heart; and that the most vulnerable people are the ones who see the world as it really is and can navigate it better than the comfortable and protected. Cayt’s ethnicity is not specified, but given that her surname is Italian she’s likely at least part-white, which reframes her role from a female Pinkerton agent in a predominately male environment to a white woman who finds professional success through the exploitation of people of color…

To read the rest of my review of Buffalo Soldier by Maurice Broaddus, head over to Tor.com.

“So he proposes what? A partnership?”

“Assuming you don’t want to sell the patents outright.”

“Our culture is not for sale. And you don’t patent nature.”

“You and your techno-shamans just run around giving everything away for free?”

“Techno-shamans? Seriously? Where do you people get your intel? Pulp novels?” Kajika rolled her eyes. There was a slight exasperation before she spoke again, slowly, as if repeating an explanation to a child. “We call them engineers. It’s from the Navajo meaning…engineers.”

Alexandria Brown is a librarian by day, local historian by night, and author and writer by passion. Much of her writing covers topics like Black history, librarianship, YA, and speculative fiction. Alex is an ace/aro biracial Black cis woman.