“Sydney once had Serena—beloved sister, betrayed enemy, powerful ally. But now she is alone, except for her thrice-dead dog, Dol, and then there’s Victor, who thinks Sydney doesn’t know about his most recent act of vengeance.

Victor himself is under the radar these days—being buried and re-animated can strike concern even if one has superhuman powers. But despite his own worries, his anger remains. And Eli Ever still has yet to pay for the evil he has done. ” (via Goodreads) 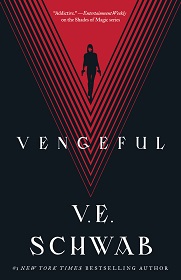 And then there’s Marcella Riggins, a new EO with a destructive ability. Eli and Victor are dragged into her orbit by sheer force of will, and she proves to be a thorn in both their sides. Marcella wants power and will unmake the world to get it. Out of all the EOs introduced in Vengeful—including a secretive shapeshifter and a depressed human shield, among numerous others—Marcella is hands down the best. Women like her are rare gems in fiction. It’s not often we get a story about a powerful woman where she isn’t reliant on or secondary to a man or where she doesn’t bother with scheming her way into a male-dominated power structure. Marcella looked at the boys’ club ruling her city and instead of asking for entry or proving her worth, she said “fuck you” and tore the whole damn tower down. And she did it all while wearing steel-heeled stilettos…

Marcus was two hundred pounds of brute strength, a man who’d made his living breaking things. But mostly people. He clucked his tongue now, as if she were being ridiculous. Blowing things out of proportion. As if she’d made him do this. Made him fuck another woman. Made him ruin all that she’d worked so hard to build.

“Ah, Marce, you’ve always known how to rile me up.”

Marcus brought his face close to hers, ran a hand through her hair, cupped her cheek. “Only if you play nice.”

He was smiling. Smiling. As if this were just another game.

Marcella spit her blood into his face.

Her husband let out a long-suffering sigh. And then he slammed her head against the table.

Marcella’s world went suddenly white. She didn’t remember falling, but when her vision flickered back she was on the silk carpet beside her chair, her head throbbing. She tried to get up, but the room swayed viciously. Bile rose in her throat, and she rolled over, vomited.

“You should have let it go,” said Marcus.

Thanks to Tor Books for sending me a review copy.

Do the world a favor and buy this from an indie bookstore or borrow it from your local public library.

Follow Punk-Ass Book Jockey on WordPress.com
Nap, interrupted.
This cute cuddle pile is brought to you by neutering. (Before getting snipped, they fought so much that they were unwilling to sleep all in the same space. Less testosterone means less battles.)
Why buy a bunch of expensive toys when you could accidentally drop an empty water bottle on the ground instead?
As a few of you know, my stepdad has been very sick this past month with late stage cancer. He passed away yesterday morning, peacefully in his sleep and in the comfort of his own home. He was born shortly before the Depression, joined the navy in WWII, and went on to become a talented artist and community theatre performer. He met and married my mom almost 2 decades ago, and they had a good partnership. Hospice has been an invaluable support system, and we couldn't have done this without them. I'm stepping away for a few days, but I hope your new year is filled with light and love.
My Tweets
Loading Comments...
%d bloggers like this: