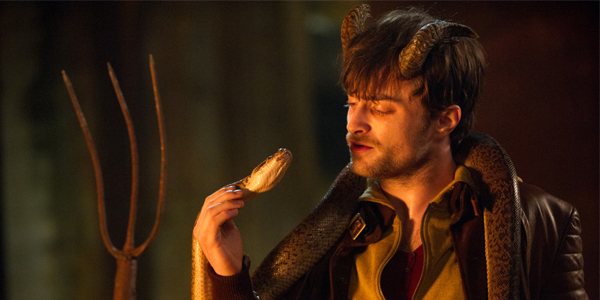 This is where the movie goes from a darkly comic supernatural fable to a middling mystery as Ig sets about using his horns to figure out who killed Merrin. Between the red herring and the real killer, the reasons behind her murder aren’t as satisfying as they should be. Yes, I know that sounds weird, but what I’m getting as is that the book does a much better job of exploring the events that lead to her murder than the movie. In the movie, the killer isn’t given enough depth or dimension to be anything more than your run-of-the-mill creepy asshole. Fortunately, horror is what Aja does best (Haute tension was bloody terrifying), so although the end comes on with all the intensity and emotional exposition of a freight train, it still manages to be an effective and chilling resolution.

Aja’s Horns is good. It’s also rocky, abrupt, and more visually extraordinary than substantive. When Hill plays with tone, he has several hundred pages to do so, whereas a film has to establish what it’s all about relatively quickly. The script by Keith Bunin, a playwright and Black List screenwriter, can’t decide if his Horns is a horror movie, a big screen procedural, or a modern day demon Alternate Universe version of Kafka’s The Metamorphosis. Bunin flits from one tone to another, and none of them seem to blend together very well. And with such drastic changes between the book and script, when the Hill-created stuff gets ported over Bunin and Aja more or less just graft it onto their story, regardless of whether or not it fits well with the new direction…