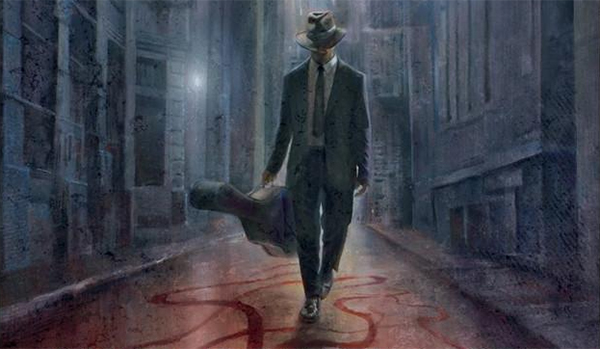 “People move to New York looking for magic and nothing will convince them it isn’t there.

Charles Thomas Tester hustles to put food on the table, keep the roof over his father’s head, from Harlem to Flushing Meadows to Red Hook. He knows what magic a suit can cast, the invisibility a guitar case can provide, and the curse written on his skin that attracts the eye of wealthy white folks and their cops. But when he delivers an occult tome to a reclusive sorceress in the heart of Queens, Tom opens a door to a deeper realm of magic, and earns the attention of things best left sleeping.

A storm that might swallow the world is building in Brooklyn. Will Black Tom live to see it break?” (via Goodreads) 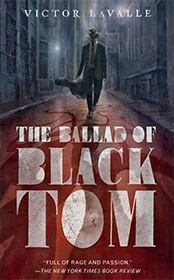 The Ballad of Black Tom is loosely set around the events of Red Hook, although by “loosely” I mean “only vaguely.” Two characters from H.P. Lovecraft’s book The Horror at Red Hook, Detective Malone and wealthy occultist Robert Suydam, have major roles in Black Tom. But don’t let their appearances fool you. This is very much Tommy Tester’s story.

Victor LaValle is very good at many writerly things, but he’s especially good at weaving commentary on race and racism in America into his stories. The thing about Tommy’s story is that it doesn’t work if you don’t talk about what it was like to navigate the world as a Black man. Literally doesn’t work. 1920s New York, like most American cities in the 1920s, was heavily and intentionally segregated. As LaValle points out, Tommy wearing a frayed suit is a political statement. Carrying a guitar case around, busking in an all-white neighborhood, affecting a simpering attitude in front of white cops, taking the job from Suydam, etc. All of it takes on a deeper meaning when the subject of all these actions is a Black man.

And then there’s the very novella itself, which acts as a sort of referendum of Red Hook, and Lovecraft’s racism in general. It’s that very racism that’s kept me from reading Lovecraft. From time to time I reconsider avoiding him like the plague – I enjoy Lovecraftian monsters and old gods emerging from the depths of hell to eradicate humankind and whatnot – but then I remember he wrote a poem entitled “On the Creation of Niggers” and back on the library shelf he goes. Luckily, there are writers like Victor LaValle to give me the good bits of Lovecraft while simultaneously taking him to task and kicking his racist ass.

LaValle does grotesque and grim like nobody’s business, and his skill is on full display here. Everything is ominous and sinister, with creeping dread and looming anxiety. Intriguingly, the monsters aren’t as frightening as the men who call them forth. Power is enticing, but we should all be worried by those who will do anything for it.

If I wasn’t already a fan of Victor LaValle’s, The Ballad of Black Tom would’ve sealed the deal. Definitely in my top books I read in 2018. Whew!

In the apartment Charles Thomas Tester went by Charles, but on the street everyone knew him as Tommy. Tommy Tester, always carrying a guitar case. This wasn’t because he aspired to be a musician, in fact he could barely remember a handful of songs and his singing voice might be described, kindly, as wobbly. His father, who’d made a living as a bricklayer, and his mother, who’d spent her life working as a domestic, had loved music. Dad played guitar and mother could really stroll on a piano. It was only natural that Tommy Tester ended up drawn to performing. The only tragedy being that he lacked talent. He thought of himself as an entertainer. There were others who would have called him a scammer, a swindler, a con but he never thought of himself this way. No good charlatan ever did.

In the clothes he’d picked he sure looked the part of the dazzling, down-and-out musician. He was a man who drew notice and enjoyed it. He walked to the train station as if he were on his way to play a rent party alongside Willy “The Lion” Smith. And Tommy had played with Willy’s band once. After a single song Willy threw Tommy out. And yet Tommy toted that guitar case like the businessmen proudly carrying their cases off to work now. The streets of Harlem had gone haywire in 1924, with blacks arriving from the South and the West Indies. A crowded part of the city found itself with more folks to accommodate. Tommy Tester enjoyed all this just fine. Walking through Harlem first thing in the morning was like being a single drop of blood inside an enormous body that was waking up. Brick and mortar, elevated train tracks and miles of underground pipe, this city lived, day and night it thrived.

Follow Punk-Ass Book Jockey on WordPress.com
A walk around the neighborhood.
The world's laziest rough housing session, supervised by me who is making sure Percy doesn't roll off the edge of the couch
P Djèlí Clark is back with the first full length novel in his Dead Djinn series, A MASTER OF DJINN. I didn't think anything could top RING SHOUT as my favorite Clark story, but here we are. 📲 review live at Tor.com.
Catching up with the last of the three 20th anniversary Decemberists shows. Finally gifted with "Shiny," one of my favorite of their songs.
My Tweets
Loading Comments...
Comment
×
%d bloggers like this: