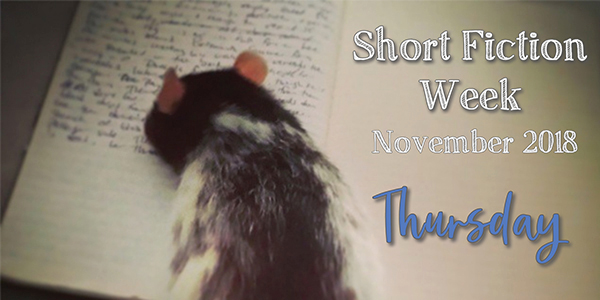 Welcome to Short Fiction Week, a biannual feature of five days of reviews of short stories and novelettes from across the science fiction and fantasy spectrum. All of the short fiction highlighted in this series is available free online, but please support the author and publications hosting this incredible work. 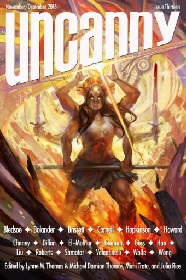 At its most basic, Seasons of Glass and Iron seems like a feminist retelling of two old fairy tales – “The Enchanted Pig” from Romania and “The Princess on the Glass Hill” from Norway. In those fairy tales, two young women undergo harsh trials in order to get a husband. One wears three pairs of iron shoes and journeys across the land to try and turn her love back from a pig to a human man. The other sits on the top of a glass mountain with three apples waiting for a man to climb the mountain and take the fruit from her. But Amal El-Mohtar’s story goes deeper than a mere retcon.

In her version, Tabitha is married to a man she loves but who does not deserve it. To turn him permanently into a man (he spends much of his time as a bear), she is cursed to wear out seven pairs of iron shoes. Part way through the third pair she comes to a steep, glass hill. At the bottom are crass, arrogant men seeking the prize at the top: a young princess named Amira. Amira sits on a glass throne, a golden apple in her hand. Her father wanted to marry her off (or worse), so she contrived this curse as a means of escape. The man who reached the top would win an apple and her hand. She was safe – no man had yet been able to make the climb – but trapped and lonely. Until Tabitha.

The two women bond over their predicaments. Both think they chose their current circumstances, but in truth both were forced into them by shitty men. (This is becoming a theme in this Short Fiction Week…I swear it wasn’t intentional, but I’m not complaining!) Years of their lives have been bent around dealing with men who would break them, carving out small ways to survive in the face of threats and mistreatment. Tabitha and Amira don’t think of themselves as victims, but they aren’t really survivors, either. To survive means to make it through, to see the end of something and continue on. When we first meet them, the end is something they haven’t yet learned to want.

I hate that it took me so long to read Amal El-Mohtar. Like, seriously hate it, that’s how much I loved this short story. Gorgeous writing, tight plotting, compelling characters. It was so well written it almost felt like a poem or an ancient song. No wonder it won a Hugo, Nebula, and Locus. Holy moly. Now if you’ll excuse me, I have to go read everything she’s ever written.

Tabitha walks, and thinks of shoes.

She has been thinking about shoes for a very long time: the length of three and a half pairs, to be precise, though it’s hard to reckon in iron. Easier to reckon how many pairs are left: of the seven she set out with, three remain, strapped securely against the outside of the pack she carries, weighing it down. The seasons won’t keep still, slip past her with the landscape, so she can’t say for certain whether a year of walking wears out a sole, but it seems about right. She always means to count the steps, starting with the next pair, but it’s easy to get distracted.

She thinks about shoes because she cannot move forward otherwise: each iron strap cuts, rubs, bruises, blisters, and her pain fuels their ability to cross rivers, mountains, airy breaches between cliffs. She must move forward, or the shoes will never be worn down. The shoes must be worn down.

Buy a copy of Issue 13 here and don’t forget to support Uncanny Magazine.