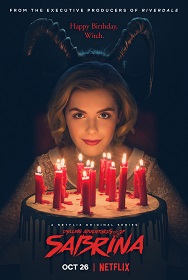 Although they share a showrunner, Netflix’s Chilling Adventures of Sabrina is far less kitschy and flighty than its CW cousin, Riverdale. Yet Sabrina does retain the same otherworldly feel… as well as the scattershot tone. Sometimes Sabrina thinks it’s a teen drama, sometimes a classic monster movie, and other times a Very Serious Television Show. Fortunately for me, I didn’t mind the show wandering all over the place. Everywhere it went was somewhere I was willing to go…