On the eve of eighteen-year-old Lady Helen Wrexhall’s presentation to the queen, one of her family’s housemaids disappears-and Helen is drawn into the shadows of Regency London. There, she meets Lord Carlston, one of the few who can stop the perpetrators: a cabal of demons infiltrating every level of society. Dare she ask for his help, when his reputation is almost as black as his lingering eyes? And will her intelligence and headstrong curiosity wind up leading them into a death trap?” (via Goodreads)

“June 1812. Just weeks after her catastrophic coming-out ball, Lady Helen Wrexhall—now disowned by her uncle—is a full member of the demon-hunting Dark Days Club. Her mentor, Lord Carlston, has arranged for Helen to spend the summer season in Brighton so that he can train her new Reclaimer powers. However, the long-term effects of Carlston’s Reclaimer work have taken hold, and his sanity is beginning to slip. At the same time, Carlston’s Dark Days Club colleague and nemesis will stop at nothing to bring Helen over to his side—and the Duke of Selburn is determined to marry her. The stakes are even higher for Helen as she struggles to become the warrior that everyone expects her to be.” (via Goodreads) 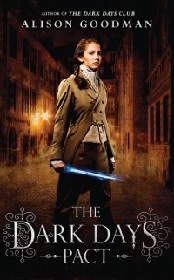 In The Dark Days Club, author Alison Goodman introduces us to Helen and the government-sanctioned organization dedicated to protecting England from supernatural baddies. Things get trickier in the sequel, The Dark Days Pact, as Helen prepares to take her oath and uncover her nemesis, but turns out there’s more wickedness amongst the so-called heroes than she expects.

While most sequels fail to live up to the heights of the original, in this case Dark Days Pact is even better than Dark Days Club. No sophomore slump for this trilogy despite the introduction of a love triangle. With each entry the series gets stronger, more visceral, and more epic in scope. What starts out as a quiet, high society Regency drama now spans a vast cast with deep connections to powerful players and global threats. Lady Helen’s focus is set on the machinations of Reclaimers in the fashionable areas of England, but her world and worldview have expanded exponentially in only a few months…

Thanks to Viking for sending me review copies.