“In the heat of midsummer 1942, deep in a forest in the heart of Poland, Briar Rose arrives at a castle that has fallen into the hands of an evil army. Corrupted by dark deeds and choked by a poisonous mist, the castle will soon come to be known as Chelmno extermination camp. And in that place of death, Briar Rose is plunged into a deep sleep…

Ever since she was a child, Rebecca has been enchanted by her grandmother Gemma’s stories of Briar Rose. Becca would have sworn the stories were made up, but on her deathbed Gemma extracts from Becca a promise to fulfill three impossible requests: find the castle, find the prince, and find the spell-maker. Her vow sends Becca on a remarkable journey to uncover the truth of Gemma’s astonishing claim: I am Briar Rose.

Yolen’s graceful retelling of the German folktale of “Briar Rose”—known to some as “Sleeping Beauty”—sets the story amid forests patrolled by the German army during World War II. Yolen confronts the deeply tragic events of the Holocaust with lyrical prose and rich characterizations that tell a tale of good and evil, hope and despair.” (via Goodreads) 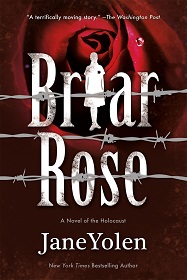 Gemma and Josef are both Sleeping Beauty in a way. The kiss they shared, however platonic, brought the two of them back to life as different people, as new people, as braver people. Both lost their homes and families to war. Both nearly died in Nazi death camps yet escaped just in the nick of time. Both loved men who died young and before that love could mature. And both emerged from the war scarred and damaged and only able to move forward by putting the past in a box, literally in Gemma’s case. The war broke them and remade them. Gemma went on to live in a home full of love while Josef was resigned to a life of loneliness near the village that thought maybe Hitler wasn’t such a bad guy after all, but in the end both were haunted by their pasts…

Thanks to Tor Teen for sending me a review copy.