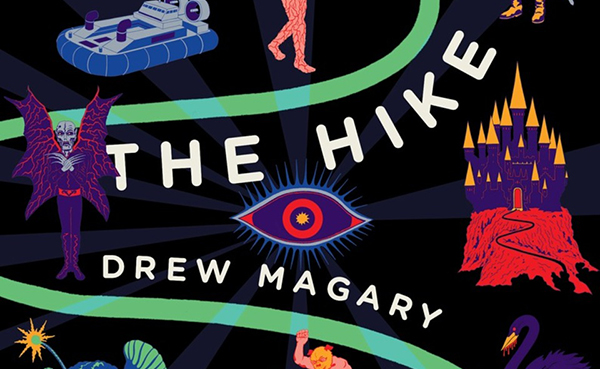 “When Ben, a suburban family man, takes a business trip to rural Pennsylvania, he decides to spend the afternoon before his dinner meeting on a short hike. Once he sets out into the woods behind his hotel, he quickly comes to realize that the path he has chosen cannot be given up easily. With no choice but to move forward, Ben finds himself falling deeper and deeper into a world of man-eating giants, bizarre demons, and colossal insects.

On a quest of epic, life-or-death proportions, Ben finds help comes in some of the most unexpected forms, including a profane crustacean and a variety of magical objects, tools, and potions. Desperate to return to his family, Ben is determined to track down the “Producer,” the creator of the world in which he is being held hostage and the only one who can free him from the path.” (via Goodreads)

It’s also a damn fun book. Witty metaphysics, laugh-out-loud jokes, and absurdist scenarios permeate the story. Magary keeps the Kafka-esque gallows humor at the forefront which prevents it from getting too Song of Kali, but that pinch of fear is there staining the edges. Magary writes with a strong personal style. His narrative flows seamlessly from one devastation to another, always with an undercurrent of charm and fancy. He starts the ride off quickly—Ben is on the path by the end of the first chapter—and never lets up on the throttle. Even the quieter moments of reflection have action churning in the background. Ben never rests, not even when he’s physically resting, and neither does the reader…

The flies had already eaten out the dogs’ eyes and all Ben could see was a layer of white subcutaneous fat slicking their skulls. He was definitely gonna throw up now. Yep, time to barf. He turned away from the dogs and let out all of the previous night’s potato roll supper.

Maybe if I smash a rock against my head…if I just bash the crazy out of my skull, I’ll wake up somewhere, strapped to a gurney, and everything will be terrible but at least it will make sense. Instead, he wrapped himself in the blanket, put his filthy socks and shoes back on, threw the backpack over his shoulder, and ran away from the campground as fast as he could.

Thanks to Viking for sending me a review copy.