“At his wit’s end, Zacharias Wythe, freed slave, eminently proficient magician, and Sorcerer Royal of the Unnatural Philosophers—one of the most respected organizations throughout all of Britain—ventures to the border of Fairyland to discover why England’s magical stocks are drying up.

But when his adventure brings him in contact with a most unusual comrade, a woman with immense power and an unfathomable gift, he sets on a path which will alter the nature of sorcery in all of Britain—and the world at large…” (via Goodreads) 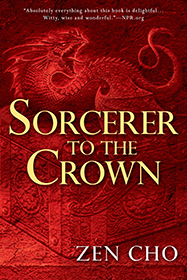 But the absolute best part was how Cho handles race in Regency England. No matter how much the bigoted Mr. Midsomer and his ilk disapprove, Zacharias is a gentleman and gentlemen must be afforded a certain level of civility. But as Zacharias and Prunella know, it’s easy enough to make your poisonous intentions known without being explicit. Today we call those microaggressions: “brief and commonplace daily verbal, behavioral, or environmental indignities, whether intentional or unintentional, that communicate hostile, derogatory, or negative racial slights and insults toward people of color.”…

Read the rest of my review at Tor.com.

Zacharias Wythe could not fail to draw attention wherever he went. The dark hue of his skin would mark him out among any assembly of his colleagues, but he was also remarkable for his height, and the handsomeness of his features, which was not impaired by his rather melancholy expression. Perhaps the last was not surprising in one who had entered into his office in such tragic circumstances, and at a time when the affairs of English thaumaturgy were approaching an unprecedented crisis.

Stranger than his colour, however, and more distressing than any other circumstance was the fact that Zacharias Wythe had no familiar, though he bore the Sorcerer Royal’s ancient staff. Lady Frances’s guests did not hesitate to tell each other what they thought of this curious absence, but they spoke in hushed voices—less in deference to the black crepe band around Zacharias’s arm than out of respect for his companion.

Thanks to Ace for sending me a review copy.

Follow Punk-Ass Book Jockey on WordPress.com
Nap, interrupted.
This cute cuddle pile is brought to you by neutering. (Before getting snipped, they fought so much that they were unwilling to sleep all in the same space. Less testosterone means less battles.)
Why buy a bunch of expensive toys when you could accidentally drop an empty water bottle on the ground instead?
As a few of you know, my stepdad has been very sick this past month with late stage cancer. He passed away yesterday morning, peacefully in his sleep and in the comfort of his own home. He was born shortly before the Depression, joined the navy in WWII, and went on to become a talented artist and community theatre performer. He met and married my mom almost 2 decades ago, and they had a good partnership. Hospice has been an invaluable support system, and we couldn't have done this without them. I'm stepping away for a few days, but I hope your new year is filled with light and love.
My Tweets
Loading Comments...
%d bloggers like this: