“After the tempest, after the reunion, after her father drowned his books, Miranda was meant to enter a brave new world. Naples awaited her, and Ferdinand, and a throne. Instead she finds herself in Milan, in her father’s castle, surrounded by hostile servants who treat her like a ghost. Whispers cling to her like spiderwebs, whispers that carry her dead mother’s name. And though he promised to give away his power, Milan is once again contorting around Prospero’s dark arts. With only Dorothea, her sole companion and confidant to aid her, Miranda must cut through the mystery and find the truth about her father, her mother, and herself.” 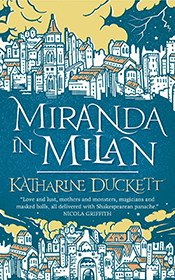 Prospero treats Miranda like an object; she’s a mark of his virility, a trophy to be awarded to the man of his choosing, and a pawn in his cruel games. Duckett offers her protagonist agency and voice. Her Miranda isn’t willing to live a life of unhappiness trapped in her father’s castle, yet neither does she want to trade his prison for Ferdinand’s gilded cage. This Miranda wants a life to call her own. She wants to run and play and love and explore, not be bound on the end of a man’s short leash. I wouldn’t go so far as to call her a feminist activist—there’s too much she doesn’t know or understand for her to truly be a revolutionary. But within the bounds set by Shakespeare and our own modern interpretations of Elizabethan femininity and sexism, Duckett’s Miranda stands out, particularly once Dorothea draws her out…

When Miranda came to Milan, she found she was a monster.

She’d been given a queen’s welcome in Naples, that lovely city on the sea, but as they’d moved inland, the warm breeze had left them, and she found herself among stony-eyed strangers who refused her gaze, who seemed loath to touch her flesh. They treated her like Caliban, her ladies-in-waiting and royal relatives.

They arrived in Milan on a cold, gray day, and as they approached, the castle of her ancestors looked more like a prison than her rightful home. Its high ramparts stretched into the mist, leached of color by the pendulous clouds, and its black mouth gaped wide, swallowing them as their carriage passed through the gates. Miranda trembled, for she could no longer see the sky. Her whole life through, sea and sky had surrounded her: with neither in sight to give her bearings, she hardly knew where she was.

One thought on “Review: “Miranda in Milan” by Katharine Duckett”