“Born into a family of powerful witchdoctors, Arrah yearns for magic of her own. But each year she fails to call forth her ancestral powers, while her ambitious mother watches with growing disapproval.

There’s only one thing Arrah hasn’t tried, a deadly last resort: trading years of her own life for scraps of magic. Until the Kingdom’s children begin to disappear, and Arrah is desperate to find the culprit.

She uncovers something worse. The long-imprisoned Demon King is stirring. And if he rises, his hunger for souls will bring the world to its knees… unless Arrah pays the price for the magic to stop him.” 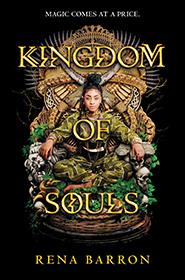 Shortly after her sixteenth birthday, Arrah’s world is shattered. Children have been disappearing, and fear and distrust is spreading across the city. The temple priests cannot locate them and the orishas—the gods her people worship—are not responding to prayers. When a friend of Arrah’s is taken, she makes the ultimate sacrifice and trades years of her life to cheat her way into possessing magic. What she discovers next propels her down a path she cannot escape from and a destiny she is ill-prepared for. The Demon King, believed to have been killed by the orishas millennia ago, is rising once more and Arrah’s fate is tied to his. Before this is over, she will lose everything and everyone she loves, maybe even herself…

Thanks to HarperVoyager for sending me a review copy.

Follow Punk-Ass Book Jockey on WordPress.com
TFW you're a spoiled little baby swaddled in a fleece blanket who is very annoyed that mom keeps waking you up so see how cute you look.
Been a while since I've done a #bookmail post. Here's everything that's landed on my doorstep in the last month. Most of these I'll be reviewing in the coming months.
Happy 1 year book-iversary to LOST RESTAURANTS OF NAPA VALLEY! (And happy 2 years and some change to HIDDEN HISTORY OF NAPA VALLEY.) I wrote these books to explore the ignored and intentionally forgotten people whose work was instrumental in making Napa County a world-renowned region. If you'd like to support me and a great independent bookstore, please buy these from @napabookmine.
Oh dear, I missed #NationalPetDay yesterday, but I'm still going to post this video of Tavish destroying my couch anyway.
My Tweets
Loading Comments...
Comment
×
<span>%d</span> bloggers like this: