“There are no more monsters anymore, or so the children in the city of Lucille are taught. With doting parents and a best friend named Redemption, Jam has grown up with this lesson all her life. But when she meets Pet, a creature made of horns and colours and claws, who emerges from one of her mother’s paintings and a drop of Jam’s blood, she must reconsider what she’s been told. Pet has come to hunt a monster, and the shadow of something grim lurks in Redemption’s house. Jam must fight not only to protect her best friend, but also to uncover the truth, and the answer to the question-How do you save the world from monsters if no one will admit they exist?” 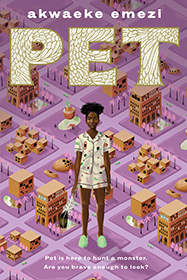 When Jam accidentally cuts herself on one of her mother’s new paintings, she inadvertently summons a creature from another world. Pet, as it calls itself, is hunting a monster preying on the family of her best friend, a boy named Redemption. But the identities of the victim and the predator are still unknown. Pet’s hunt will force the teens to confront truths they never wanted to know and expose the lies the townsfolk have been telling themselves for years. Torn between Pet’s deadly vengeance, Redemption’s rage, her parents’ willful ignorance, and a town that won’t listen, Jam must decide what is justice, what is right, and what must be done, even when those three things don’t agree…

Thanks to Make Me a World for sending me a review copy.

One thought on “Review: “Pet” by Akwaeke Emezi”

Alexandria Brown is a librarian by day, local historian by night, and author and writer by passion. Much of her writing covers topics like Black history, librarianship, YA, and speculative fiction. Alex is an ace/aro biracial Black cis woman.