“Allie Abraham has it all going for her—she’s a straight-A student, with good friends and a close-knit family, and she’s dating cute, popular, and sweet Wells Henderson. One problem: Wells’s father is Jack Henderson, America’s most famous conservative shock jock…and Allie hasn’t told Wells that her family is Muslim. It’s not like Allie’s religion is a secret, exactly. It’s just that her parents don’t practice and raised her to keep her Islamic heritage to herself. But as Allie witnesses ever-growing Islamophobia in her small town and across the nation, she begins to embrace her faith—studying it, practicing it, and facing hatred and misunderstanding for it. Who is Allie, if she sheds the façade of the “perfect” all-American girl? What does it mean to be a “Good Muslim?” And can a Muslim girl in America ever truly fit in?” 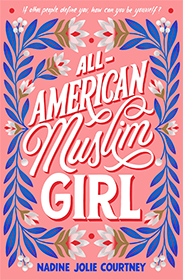 While All-American Muslim Girl treads a pretty well-worn path, plot-wise – if you’ve read any YA contemporary romance in the last decade then you already know exactly what’s going to happen – it layers the tropes with some very insightful commentary. More than a YA romance, this is also a story about a young Muslim woman learning how to navigate an increasingly hostile world.

Externally, she deals with xenophobia, racism, and sexism from white American bigots; internally she struggles to sort through her father’s resistance to his Islamic traditions and her desire to explore her religious heritage. The overarching plot may be straightforward, but Allie’s experiences are anything but.

As a Circassian, Allie has white passing privilege, something many other Muslims don’t. And she’s well aware of it, and knows how to use it to protect those who aren’t as lucky. We don’t talk enough about passing privilege in YA, so I was very happy to see it express so thoughtfully here. I also appreciated how Nadine Jolie Courtney handled Allie’s father’s fraught relationship with his religion and cultural traditions, and how parents’ can make choices they think are protecting their children but cause more harm than good. At first Allie latches onto Islam as the ideal, but the more she learns the more she comes to understand why her father made the decisions he did. Islam is no more “perfect” than Christianity or any other religion, and all of them have awful people ruining things for the rest of us. With the help of new friends and eager family, Allie discovers the goodness in Islam and begins to carve her own path through it to deeper understanding.

This timely, important book will make a good addition to public and school libraries, not to mention teen book clubs. Frankly, I’d even recommend it for adult book clubs as well.

Thanks to the author for sending me a review copy.

Follow Punk-Ass Book Jockey on WordPress.com
Early Sunday morning, Oliver breathed his last. He had been dying very slowly since October and then all at once and all of a sudden. He passed in my arms feeling loved and protected.
On this day last year, I drove 5 hours round trip to adopt this very cute little boy. He's had a tumultuous year, health-wise (thanks to a shitty breeder), but being thoroughly spoiled has certainly made it easier.
Yet again Oliver is feeling poorly, but at least he still looks cute when he dreams.
Read 2 hella excellent novellas this weekend. Put these on your #TBR immediately. 📚: RIOT BABY by Tochi Onyebuchi and UPRIGHT WOMEN WANTED by Sarah Gailey. ... #books #BookRecommendations #bookish #dystopia #dystopian #tordotcompublishing #tornovellas #bibliophile #read #igreads
My Tweets