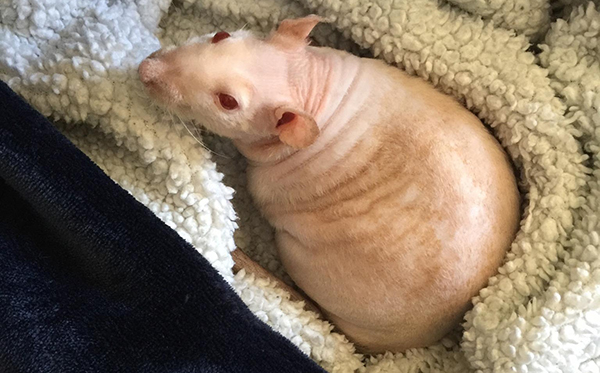 I’ve decided to do a big blog post on Oliver’s weird health issues. This will probably not be of any interest to anyone but me and other rat people, but I’m doing it anyway. I’ll be adding to this post as new things inevitably crop up.

First, a bit of background. I adopted Oliver from the Humane Society of Silicon Valley in Milpitas on January 19, 2019. He was a year old at the time. For some bizarre reason, the Humane Society decided to split up a bonded sibling pair and adopt out his brother to another family who only wanted one rat, so of course I couldn’t just leave Ollie there alone.

Oliver is a double rex, meaning he’s the byproduct of two rex (curly) coat parents. Double rexes often have a variety of health issues, so their lifespan may be shorter than usual. They also drink way more water than other rats, for reasons unknown.

He also gets a build-up of buck grease on his back. Normally I wouldn’t do anything about it, but since it seemed to bother him I would give him a bath using an aloe and oatmeal-based puppy shampoo about every two months. While he was all soapy I’d use a toothbrush to lightly brush off the buck grease. Since adopting him, he’s continued to lose his fur. Now that he’s lost almost all his fur on his tummy and only has peach fuzz on his back, I haven’t needed to do this. Instead, the cold air has dried out his skin, so I am giving him regular coconut oil massages.

Oliver already had the beginnings of an Upper Respiratory Infection when I got him. URIs are extremely common in pet rats and are generally easy to treat. He’s been on some form of doxycycline and/or enrofloxacin on and off since I got him. Currently he’s on a doxy/enro combo (2ccs twice a day mixed into a teaspoon of oatmeal) and 1cc of furosemide (a diuretic to deal with fluid build-up in his lungs) 2-4 times per day when needed.

This timeline is arranged by most recent update at the top.

Had sutures removed 10 days after surgery, December 5. Results of labwork on the mass came back. Not a necrotic tumor or abscess like we thought but a follicular cyst. Usually follicular cysts grow on the skin, but this one was growing inside his body. Pus still leaks from the incision and I will have to drain it regularly and keep it clean using water wipes. If the cyst refills to the size of a green grape then I will need to bring him back to the vet so they can drain it. As he’s still on the doxy/enro combo for his URI, that will help treat the cyst.

Ollie is back to his usual perkiness. Eating very well and drinking a lot (as is normal for him). A few weeks ago I worried he wouldn’t live to see the new year and now I’m confident he has plenty of time left.

Switched him to Oxbow Essentials for adult rats and he loves the new kibble. He’s back to his usual chunkiness. Noticed a small lump near his groin. Got him to a new vet on November 23 and surgery scheduled for two days later. Mass was removed – fully enclosed in a fatty sac, some pus inside. Vet unsure of diagnosis so it was sent to a third party lab for tests.

Oliver did not have any negative reactions to anesthesia when I had him neutered in the spring, but this time he had pica and numbness so severe that for nearly 12 hours he was gnawing his fingernails until they bled. Once the anesthesia was out of his system he stopped biting his hands.

Put Ollie on a few doses of dexamethasone mixed with sterile water and used in a nebulizer to deal with the pneumonia. Nebulized him twice a day: on for a total of 2.5 minutes, in box for 6 minutes. Reduced to once a day after three days, then stopped completely after a week. Weight getting back to normal, although still using baby food with crushed up lab blocks (Mazuri) as a supplement.

Kincade Fire starts on the 23rd. I had been planning to get Oliver in to see a new vet the following weeks, but the smoke and stress made his URI worse. Evacuated to a county with no power. By Halloween it was clear his URI had worsened into pneumonia. Night of October 30 was very rough. He could barely breathe and had stopped eating. He was skin and bones and had probably dropped down to 400 grams or less. He nearly suffocated to death in the middle of the night. I was convinced I’d have to put him down. Fortunately, my old vet had power. Oliver was too ill to travel, but I was able to get a doxy/enro combo. Within two doses, Oliver was already feeling better and eating again.

Oliver was stuffy again. I knew he’d need to go on meds in a few weeks if it got worse, but he seemed stable. Added stress from packing/unpacking and moving house pushed him into a full blown case of URI. He began to lose a little weight – noticeable but not worrisome as he was already pretty chunky (550 grams at last check up on October 11.