“In a sprawling mansion filled with peculiar treasures, January Scaller is a curiosity herself. As the ward of the wealthy Mr. Locke, she feels little different from the artifacts that decorate the halls: carefully maintained, largely ignored, and utterly out of place.

Then she finds a strange book. A book that carries the scent of other worlds, and tells a tale of secret doors, of love, adventure and danger. Each page turn reveals impossible truths about the world and January discovers a story increasingly entwined with her own.” 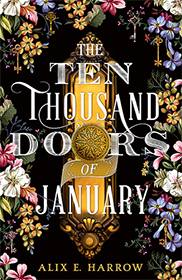 This novel, y’all. Whew, this novel.

I can’t do a traditional review of The Ten Thousand Doors of January. It’s too gorgeous, too perceptive, too eviscerating. Every grammatical, metaphorical, and structural choice made by Alix E Harrow is on point and exacting. I can see no problems or weaknesses, just pages and pages of awesomeness. So instead I’m just going to rave about it.

The Ten Thousand Doors of January examines under a microscope the patriarchy, racism, colonialism, capitalism, and even literature, reading, and the writing process. Like Leigh Bardugo did with Ninth House, another 2019 fave, Harrow peels back what we the readers think we know and shows us that we only know what those in power have chosen to show us. As January falls deeper and deeper into the mysterious book discovered at the bottom of a magic chest, she discovers that she is more than the men (both the cishet white men in power and those who are oppressed by them) in her life assume her to be. Resistance appears in many forms in the book, yet it’s January’s acts of resistance, the large and the small, that drive the plot.

Set in the early 20th century, Harrow shows us a world just beginning to modernize, where those in control use globalization as a cudgel to assert their will while the oppressed use it as a tool to secure their independence. January’s story begins long before she’s born, but it can only reach fruition as colonial powers begin to crumble and the underclass asserts itself.

I’ve barely scratched the surface here of this incredible book. If you’re still on the fence, maybe me telling you that this was one of my favorite books of the year will convince you to pick it up. The Ten Thousand Doors of January is that fucking good.

Follow Punk-Ass Book Jockey on WordPress.com
Got some bad Tavish related news so I'm gonna disappear for a few days. Gotta spend as much time as possible with him while I still can.
Timeline cleanse.
Latest #bookmail!
Best part of summer vacation is spending all my time relaxing in my lounge chair on my balcony.
My Tweets
Loading Comments...
%d bloggers like this: