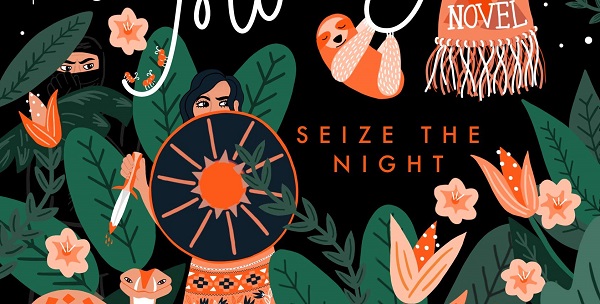 “Ximena is the decoy Condesa, a stand-in for the last remaining Illustrian royal. Her people lost everything when the usurper, Atoc, used an ancient relic to summon ghosts and drive the Illustrians from La Ciudad. Now Ximena’s motivated by her insatiable thirst for revenge, and her rare ability to spin thread from moonlight.

When Atoc demands the real Condesa’s hand in marriage, it’s Ximena’s duty to go in her stead. She relishes the chance, as Illustrian spies have reported that Atoc’s no longer carrying his deadly relic. If Ximena can find it, she can return the true aristócrata to their rightful place.

She hunts for the relic, using her weaving ability to hide messages in tapestries for the resistance. But when a masked vigilante, a warm-hearted princess, and a thoughtful healer challenge Ximena, her mission becomes more complicated. There could be a way to overthrow the usurper without starting another war, but only if Ximena turns her back on revenge—and her Condesa.” 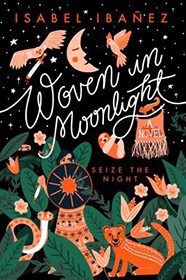 You think you know what’s going to happen in Isabel Ibañez’s Woven in Moonlight. A young woman finds herself at the center of an impending revolution against a politically corrupt and morally indecent. You’ve read this story a million times, right? Except you haven’t, at least not in the way Ibañez takes it.

It takes a while for that revelation to appear. Once Ximena gets to the palace, she encounters the evil ruler, a noble who hates her people, and a guard who is more than he seems. Soon it becomes clear that Ximena doesn’t know the truth about her people’s history and the violent rebellion that lead to their isolation. Familiar, right? Here’s where Ibañez gets deep. Carefully and diligently she examines this classic YA trope under the lense of colonialism. How does her cause change when Ximena learns her people are the colonizers rather than the colonized, when the acts of violence perpetrated on her people today are the same ones they inflicted on the rebels for centuries? Does the past justify the present? Or does it offer an excuse to forge a better future?

Much to my delight, Ibañez weaves in Spanish words without italicizing; there’s a glossary in the back, but there’s easily enough context clues to figure out what’s being said. The fantasy elements don’t get dealt with as much as I’d like. Magic is there, but Ibañez doesn’t really explain how or why. I don’t need a detailed system of rules, but I’d like something, anything. However, that’s a minor quibble. With a lush, unique setting and well-developed characters, Woven in Moonlight is hard not to love.

Follow Punk-Ass Book Jockey on WordPress.com
The boys have figured out how to climb to the top of their cage...but not how to climb back down.
Bought so many new books for my school library last night!
Beautiful bookmail! Link in profile for the full list and descriptions.
When you're waiting for dinner but you're also sleepy.
My Tweets
Loading Comments...
%d bloggers like this: