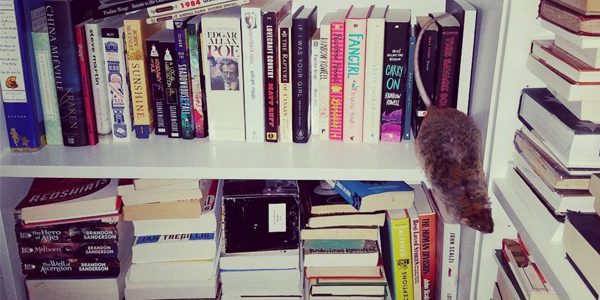 This month’s Reading Round Up offers a collection of some of the best articles I read, covering topics including a forgotten enslaved woman, the California housing crisis, and anti-Blackness. Plus a list of my own written work. Get those tabs ready!

Review: DC’s Legends of Tomorrow and the Losers Who Become Heroes (and Then Losers Again)

Review: A Duke by Default by Alyssa Cole

“The Lost Story of Julia Chinn” by Leslie Potter for KET: “She’s literally been erased,” says Amrita Chakrabarti Myers, Ruth N. Halls Associate Professor of History and Gender Studies at Indiana University. “We don’t even know where she’s buried. We’ve literally lost a vice president’s wife, but because she was enslaved, no one cared.”

“Deceit, Disrepair and Death Inside a Southern California Rental Empire” by Aaron Mendelson for LAist: “By nightfall, though, everything seemed to be working. Around 8:30 p.m., Rodriguez put 5-month-old Jenica to bed in her pink onesie, wrapping her up in blankets. Then she joined Lozano in the living room, and dozed off. She woke up in an inferno, Lozano shaking her. She began coughing. She looked up and saw a wall of fire between her and her daughter.”

“No Solutions: A Personal Examination of Online Anger About Guns Akimbo” by Robert Daniels for RogerEbert.com: “My journey through this initially began through anger: seeing a slur used by someone I know. Then it moved to worry for their safety. It went into overdrive after a visceral reaction to a director using his platform for gaslighting. For lies. For racism. This became a cycle of blindspots, and a constant blockage of discussing race, suicide, and alliance.”

“If You’re Going to Challenge the 1619 Project, Don’t Do It This Way” by Scott Woods for Level: “The 1776 argument is essentially a bootstrap argument — the Bill Cosby pound cake speech sprung to life — which always sounds good on paper but translates poorly when applied to the lives of millions of Black people who cannot afford boots. Their response to racism is Black Exceptionalism: not “stop racism,” but “work harder.” As if there exists an era when Black people have not been the hardest working people in the building.”

“America’s Mental Health Crisis Hidden Behind Bars” by Eric Westervelt for NPR: “It’s recreation time at a Los Angeles County jail known as the Twin Towers. Nearly a dozen disheveled young men stand docilely as they munch on sandwiches out of brown paper bags. They’re half-naked except for sleeveless, thick, blanket-like restraints wrapped around them like medieval garments. All are chained and handcuffed to shiny metal tables bolted to the floor.”

“Awkwafina and The Trend of Asian American Creatives Using Anti-Blackness To Enter Hollywood” by Harley Wong for Wear Your Voice: “Although Lum’s award is framed as a triumph for the Asian American community, she exploited Black culture to reach this milestone, indicating that her career is also in service to white hegemony. Born to a Chinese American father and Korean mother, Lum adopted Aquafina as her rap name at age sixteen. It’s worth noting that the name Awkwafina has been interpreted as mocking Black women’s names under the stereotype that their names are “nonsensical” or “ghetto.””