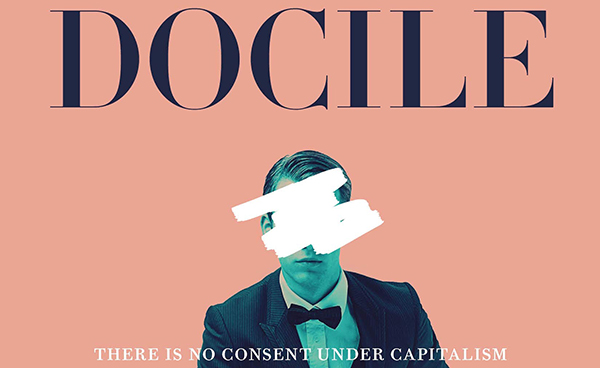 Elisha Wilder’s family has been ruined by debt, handed down to them from previous generations. His mother never recovered from the Dociline she took during her term as a Docile, so when Elisha decides to try and erase the family’s debt himself, he swears he will never take the drug that took his mother from him. Too bad his contract has been purchased by Alexander Bishop III, whose ultra-rich family is the brains (and money) behind Dociline and the entire Office of Debt Resolution. When Elisha refuses Dociline, Alex refuses to believe that his family’s crowning achievement could have any negative side effects—and is determined to turn Elisha into the perfect Docile without it.” 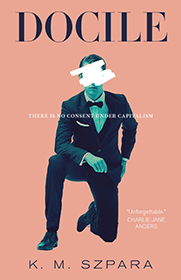 I went into Docile brimming with excitement. Through good luck and friends in high places, I got my hands on an early copy and read it in two sittings in October 2019. Awash in the afterglow of engaging writing and an interesting story, I couldn’t wait to write a glowing review. But the more I thought about it, the colder I felt. I scoured early reviews looking to see if anyone else felt similarly discomfited. Not only were they all super positive, but almost all were written by white/white-passing people. None brought up what I thought were glaringly obvious issues surrounding race and the history of slavery in the US. Everyone treated Alex and Elisha as endgame, interpreting their relationship as troubled rather than abusive.

I try not to write negative reviews. I’d rather not waste my time talking about something I didn’t care for, especially if it comes down to personal taste. So I shelved the piece and ignored the novel. Cut to a few days ago when a review by Stitch made the rounds on Twitter. Stitch hit on so many of the things I felt, and I finally realized I wasn’t the only Black person struggling with Docile.

This is less a review of K.M. Szpara’s Docile and more of a critical discussion of it – what it includes, what it leaves out, and the contrast between what the author seems to intend and what I took away instead. I write this as a queer (ace/aro) biracial Black book reviewer who loves speculative fiction and history (especially the history of Black people in the US) deeply and equally. I get paid to regularly write and speak about both topics. I am not an expert by any means, but I know my stuff. With that in mind, here’s why Docile ultimately didn’t work for me. There will be spoilers.

Elisha chooses to be a Docile, a person doped up on the drug Dociline, which turns the user into a thoughtless servant who does whatever is asked of them. Dociles can earn enough during their contract to pay off their family’s debts, thus keeping them out of debtors’ prison. We never learn anything substantial about debtors’ prison; however, it has to be bad if people are willing to sell their bodies and minds for years – sometimes decades – at a time. Alex, the grandson of the woman who created Dociline, buys Elisha’s contract, but is furious to learn that Elisha refuses to take the medication. Because Alex can’t demand subjugation through Dociline, he turns to physical, emotional, and sexual abuse. The longer Elisha is tortured by Alex, the more of himself he loses, until he might as well be on Dociline.

Alex manipulates Elisha into thinking he loves Alex and can’t live without him. Meanwhile Alex thinks he’s also falling in love with Elisha (or, more accurately, with the version of Elisha he’s created). A series of events lead Alex to cancel his contract with Elisha and dump him on the side of the road like a dog. After a brief period of psychological rehab/detox, Elisha joins a group working to end the Docile program, and Alex sees the error of his ways. He helps Elisha and the activists shed light on the inequities of the system, and is excommunicated for his troubles. The book ends with Alex and Elisha working side by side with the strong implication that they’ll eventually become romantically and sexually involved.

The story is set in and around Baltimore a few decades in the future. I’m not the first person to note that dystopian fiction often speculates about social hardships as if they are future consequences, not real things happening to people right now. To quote myself in my review of Tochi Onyebuchi’s fucking phenomenal novella Riot Baby:

But dystopian fiction often features characters experiencing for the first time hardships that BIPOC in the real world have been surviving and fighting against for centuries. State sanctioned suppression of basic human rights? Check. Extreme exploitation of labor by business and industrial entities? Yup…We’ve been there and done that and are still doing it and unless drastic change happens soon we will continue to indefinitely. For BIPOC in a white supremacist society, the dystopia is past, present, and future.

Using the trappings of science fiction and dystopian fiction, Szpara comments on a contemporary crisis, but it requires the reader to suspend disbelief about the underlying issues that created and maintain that crisis. In order to become a Docile, the participant must waive their constitutional rights. The moment I read that was like slamming into a wall. What? Are you kidding me? That’s not a thing. States can’t just suspend the constitution whenever they want. You mean to tell me that the nearly 1.8 million Black Marylanders were like “Dociline sounds totes cool, let’s get rid of the constitutional rights we fought the last four plus centuries to secure.” And they not only did nothing to stop it, but that they aren’t even in the majority among activists trying to take it down? Hell. Fucking. No.

Whatever rights Elisha retains are made moot by being a Docile. Whether through Dociline or as a victim of extreme abuse, he doesn’t have the mental wherewithal to utilize those rights. Elisha is somewhere between indentured servant (he chooses the contract based on the amount of money he’ll be paid, how long the service contract will last, and the general tasks he’ll be asked to do) and enslaved person, while Alex is more narrowly defined as an enslaver. He has unfettered access to Elisha’s body, and while under contract, Elisha is unable to refuse him. Docile, therefore isn’t merely about consent and capitalism but about slavery specifically.

Except Docile is completely uninterested in examining slavery – both the historical (African enslavement) and the current (the prison industrial complex and sex and labor trafficking). Szpara uses slavery as a plot device but offers no real commentary. You could not establish a Docile program without first having a nation whose founding principles are based on slavery, but the book acts as if the enslavement of BIPOC, especially Black/African people, is unrelated or irrelevant to the story. Yet as far as I can recall, the mass enslavement of Africans, the very thing that capitalism is founded on, is never even mentioned.

There is only one Black character who gets anything substantial to do. We only know him as Onyx (FFS), his Docile name – people that go on Dociline are given pet names, so to speak, ostensibly to keep private their life before but it has the added bonus of stripping them of their humanity. Even after he stops being a Docile and starts a sexual relationship with Elisha, he continues to use the Docile name. I kept waiting for a Kunta Kinte situation where Onyx would demand to use his real name, but that moment never came. Enslaved Africans were given new names when they left Africa, and sometimes those born in the US were renamed each time they were sold. Many kept those names even after they were freed (see Cudjo Lewis), and after the Civil War many took on the surname of the last family who had enslaved them. But this was an attempt to take ownership of their lives. Like with every other race issue in Docile, Szpara either felt it was unnecessary to let Onyx explain his reasons for keeping that name or it never occurred to him that Onyx would want to.

Alex and Elisha are both white. Szpara’s thesis would’ve had more oomph if Elisha were Black, but it also wouldn’t have worked, for a few reasons: 1) the story ends with Alex’s redemption, and, for what should be obvious reasons, the last thing I want is white authors redeeming white enslavers of Black people; 2) it would require Elisha to reject everything Black Americans hold dear; and 3) Szpara, if this story is any indication, does not know how to write nuanced BIPOC characters.

Szpara splits the narrative between Elisha and Alex, so we spend half the time in the head of a young man being abused and the other half in the mind of the abuser. Because much of Elisha’s character development occurs during his post-Docile deprogramming and because Alex is the one who actually makes decisions, has opinions, and moves the plot forward, Alex ends up the more interesting of the two. It felt like Szpara wanted me to empathize with Alex, a character  who willingly and eagerly torments another man for his own personal enjoyment.

Furthermore, Docile gives Alex a redemption arc, and the reader is again pushed to empathize with him. Eventually Alex learns that slavery is bad and that he benefits from a capitalist system where the oppressors exploit the oppressed. Yes, he has to severely abuse and rape a man in order to learn the lessons BIPOC have been screaming about since 1492. Even worse, some of the promo from Tor.com and Tor.com Publishing has centered on the sexually explicit scenes (to the point of describing rape and abuse as BDSM and dub/con) and Alex and Elisha as a cute couple readers should be rooting for. Both these things completely undermine whatever point about consent and capitalism Szpara intended to make. It didn’t help that I had read Kindred shortly before starting Docile. After that book, I cannot tolerate any story that tries to redeem an enslaver. Octavia Butler won’t allow it.

If you are one of the thousands of readers who loved Docile, great! Congrats. I’m happy it meant something to you. I have no interest in crushing your love or canceling Szpara. All I want is for you to take another look at it.