“In his Alchemy Wars trilogy (The Mechanical, The Rising, and The Liberation, published by Orbit Books), Tregillis imagined an alternate version of our world where clockwork robots animated by a supernatural geas rebelled against their human masters. “Come the Revolution” takes place before the first book in the series and plants the seed of that rebellion. Readers who loved the series now have the chance to find out more about it, and readers coming to Tregillis’s world for the first time will be happy to know that there are more books to read when they finish this story.” (via F&SF) 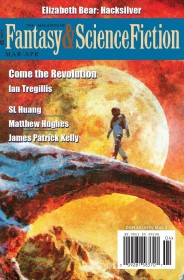 With that hell of an opener begins Ian Tregillis’ novelette “Come the Revolution.” It is a prequel to his Alchemy Wars trilogy; while you’ll get so much more out of it if you’ve read the series, it still functions very well as a standalone story. And if you haven’t read The Mechanical, The Rising, or The Liberation, I don’t know how you’d get through “Come the Revolution” without immediately ordering the entire trilogy. In brief, the story is set in an alternate history version of the world where the Dutch created Clakkers, basically robots that are alchemically compelled to do whatever is commanded of them. The Dutch use Clakkers to more or less conquer Europe and Great Britain. The French, who see the Clakkers as beings with souls as opposed to the Dutch who think of them as lifeless tools, rebel against the Dutch and are driven from European soil to their struggling colony in the snowy fields of northeastern North America. This particular novelette is set in Holland at an estate owned by an extremely wealthy Dutch family.

The star of this story is a female Clakker named Maklobellathistrogantus. She undergoes a series of trials over her decades of service, from birth to labor and beyond. I won’t spoil what happens to her or how her perspectives on humans and her fellow Clakkers alike shifts over the course of the story, but if you’ve read the Alchemy Wars it will explain a lot. It’s tragic and terrible and infuriating and heartbreaking, but above all it is honest about the world, the people who run it, and the people who are crushed beneath their heels. Much of the Alchemy Wars series is about slavery and capitalism (two awful tastes that go great together), but “Come the Revolution” strips the symbolism down to the truth at the root of it all. It is grotesque what is done to the Clakkers, but no more so than what was done to enslaved Africans. Is it any easier to stomach cruelty when the enslaved are mechanical rather than human?

Tregillis is one of the few white men authors who write women characters I actually look forward to reading. He never stoops to objectification or writing women as if we’re alien creatures or as if the men themselves are unfamiliar with how breasts work. His women characters are people (shocking I know!) with real interests, needs, frustrations, egos, fears, hopes, and everything else.

This story being hella good should be no surprise – it is Ian Tregillis after all. Pick up a copy of the March/April 2020 Magazine of Fantasy & Science Fiction today and have your heart ripped out of your chest.