“Ari Helix may have won her battle against the tyrannical Mercer corporation, but the larger war has just begun. Ari and her cursed wizard Merlin must travel back in time to the unenlightened Middle Ages and steal the King Arthur’s Grail—the very definition of impossible.

It’s imperative that the time travelers not skew the timeline and alter the course of history. Coming face-to-face with the original Arthurian legend could produce a ripple effect that changes everything. Somehow Merlin forgot that the past can be even more dangerous than the future…” 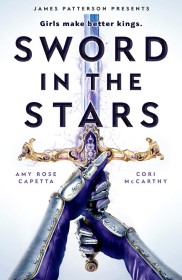 What comes so easily to Arthur is an endless fight for another character whose identity I won’t reveal for spoiler reasons. They attempt the hero’s journey and is denied again and again by men who have summarily decided they are unworthy of such privilege. So they skip the journey and go straight for the power, thereby forcing them into the role of villain. But are they really? In a way they merely traded one set of shackles for another. As a child they were trapped by the patriarchy and as an adult they are trapped in a prison of their own making. Does that make them evil? Or does it make them human?..