I come bearing gifts of great reading! Here’s a comprehensive guide to young adult speculative fiction (science fiction, fantasy, horror) being published in May 2020. Up first is a short list of the books I highly recommend, followed by a long list of basically every book being published.

Get your library cards and indie bookstore pre-orders ready, y’all. 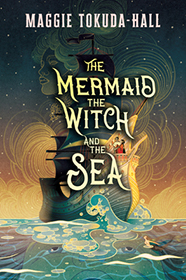 The Mermaid, the Witch, and the Sea by Maggie Tokuda-Hall – May 5, 2020
“The pirate Florian, born Flora, has always done whatever it takes to survive—including sailing under false flag on the Dove as a marauder, thief, and worse. Lady Evelyn Hasegawa, a highborn Imperial daughter, is on board as well—accompanied by her own casket. But Evelyn’s one-way voyage to an arranged marriage in the Floating Islands is interrupted when the captain and crew show their true colors and enslave their wealthy passengers.

Both Florian and Evelyn have lived their lives by the rules, and whims, of others. But when they fall in love, they decide to take fate into their own hands—no matter the cost.

Maggie Tokuda-Hall’s sweeping fantasy debut, full of stolen memories, illicit mermaid’s blood, double agents, and haunting mythical creatures conjures an extraordinary cast of characters and the unforgettable story of a couple striving to stay together in the face of myriad forces wishing to control their identities and destinies.” – Candlewick

Empress of Flames by Mimi Yu (The Girl King #2) – May 12, 2020
“Princess Lu knows that the throne of the Empire of the First Flame rightfully belongs to her. After all, she is the late Emperor’s firstborn and has trained for the role all her life. And she can’t forget made a promise to shapeshifter Nok, the boy she came to love, to win justice for his now powerless people. But even with an army at her side, Lu will need to face down a major obstacle: the current sitting Empress, her once beloved younger sister, Min.

Princess Min used to live in Lu’s shadow. But now she can control a powerful, ancient magic, and she’s determined to use it to forge her own path and a strong future for the Empire, even if that means making enemies in court. But Min’s magic isn’t entirely under her control, and she must learn how to tame it before it consumes her . . . and the entire realm.

Lu and Min are set for a confrontation that can’t be stopped. But the Empire faces threats greater than their rivalry, and even if they choose to stand together, it could cost them both the throne-or their lives.” – Bloomsbury YA

The Fascinators by Andrew Eliopulos – May 12, 2020
“Living in a small town where magic is frowned upon, Sam needs his friends James and Delia—and their time together in their school’s magic club—to see him through to graduation.

But as soon as senior year starts, little cracks in their group begin to show. Sam may or may not be in love with James. Delia is growing more frustrated with their amateur magic club. And James reveals that he got mixed up with some sketchy magickers over the summer, putting a target on all their backs.

With so many fault lines threatening to derail his hopes for the year, Sam is forced to face the fact that the very love of magic that brought his group together is now tearing them apart—and there are some problems that no amount of magic can fix.” – HarperTeen

This Coven Won’t Break by Isabel Sterling (These Witches Don’t Burn #2) May 19, 2020
“Hannah Walsh just wants to finish high school. It’s her senior year, so she should be focusing on classes, hanging out with her best friend, and flirting with her new girlfriend, Morgan. But it turns out surviving a murderous Witch Hunter doesn’t exactly qualify as a summer vacation, and now the rest of the Hunters seem more intent on destroying her magic than ever.

When Hannah learns the Hunters have gone nationwide, armed with a serum capable of taking out entire covens at once, she’s desperate to help. Now, with witches across the country losing the most important thing they have–their power–Hannah could be their best shot at finally defeating the Hunters. After all, she’s one of the only witches to escape a Hunter with her magic intact.

Or so everyone believes. Because as good as she is at faking it, doing even the smallest bit of magic leaves her in agony. The only person who can bring her comfort, who can make her power flourish, is Morgan. But Morgan’s magic is on the line, too, and if Hannah can’t figure out how to save her–and the rest of the Witches–she’ll lose everything she’s ever known. And as the Hunters get dangerously close to their final target, will all the Witches in Salem be enough to stop an enemy determined to destroy magic for good?” – Razorbill

The Archer at Dawn by Swati Teerdhala (Tiger at Midnight #2) – May 26, 2020
“A stolen throne. A lost princess. A rescue mission to take back what’s theirs.

For Kunal and Esha, finally working together as rebels, the upcoming Sun Mela provides the perfect guise for infiltrating King Vardaan’s vicious court. Kunal returns to his role as dedicated soldier, while Esha uses her new role as adviser to Prince Harun to seek allies for their rebel cause. A radical plan is underfoot to rescue Jansa’s long-lost Princess Reha—the key to the throne.

But amidst the Mela games and glittering festivities, much more dangerous forces lie in wait. With the rebel’s entry into Vardaan’s court, a match has been lit, and long-held secrets will force Kunal and Esha to reconsider their loyalties—to their countries and to each other.

Getting into the palace was the easy task; coming out together will be a battle for their lives. In book two of Swati Teerdhala’s epic fantasy trilogy, a kingdom will fall, a new ruler will rise, and all will burn.” – Katherine Tegen

Out Now: Queer We Go Again! edited by Saundra Mitchell – May 26, 2020
“A follow-up to the critically acclaimed All Out anthology, Out Now features seventeen new short stories from amazing queer YA authors. Vampires crash prom…aliens run from the government…a president’s daughter comes into her own…a true romantic tries to soften the heart of a cynical social media influencer…a selkie and the sea call out to a lost soul. Teapots and barbershops…skateboards and VW vans…Street Fighter and Ares’s sword: Out Now has a story for every reader and surprises with each turn of the page This essential and beautifully written modern-day collection features an intersectional and inclusive slate of authors and stories.” – Inkyard Press

All YA Spec Fic

Aurora Burning by Amie Kaufman and Jay Kristoff (The Aurora Cycle #2)
“Shocking revelations, bank heists, mysterious gifts, inappropriately tight bodysuits, and an epic firefight will determine the fate of the Aurora Legion’s most unforgettable heroes–and maybe the rest of the galaxy as well.” – Knopf Books for Young Readers

The Betrothed by Kiera Cass (The Betrothed #1)
“A would-be queen. A handsome young king. A perfect match…or is it?” – HarperCollins

Path of Night by Sarah Rees Brennan (The Chilling Adventures of Sabrina #3)
“Half-witch, half-mortal 16-year-old Sabrina Spellman has made her choice: She’s embraced her witchy roots, and her power is growing daily. But will it come at too high a price?” – Scholastic Inc.

The Dark In-Between by Elizabeth Hrib
“Red—an angel fallen to earth to regain his wings—takes her to Limbo, a place that exists somewhere between the living and the dead. Now, in order to save her best friend, Casey must learn to walk these mysterious and dangerous paths or else risk losing Liddy’s trapped soul to something worse than death.” – Swoon Reads

Dark Skies by Danielle L. Jensen (Dark Shores #2)
“With Mudamora falling beneath the armies of the Corrupter, Lydia and Killian strike a bargain to save those they love most—but it is a bargain with unintended and disastrous consequences. Truths are revealed, birthrights claimed, and loyalties questioned—all while a menace deadlier and more far-reaching than they realize sweeps across the world.” – Tor Teen

House of Dragons by Jessica Cluess (House of Dragons #1)
“Five royal houses will hear the call to compete in the Trial for the dragon throne. A liar, a soldier, a servant, a thief, and a murderer will answer it. Who will win?” – Random House Books for Young Readers

The Ballad of Songbirds and Snakes by Suzanne Collins (The Hunger Games #0)
“Ambition will fuel him. Competition will drive him. But power has its price.” – Scholastic Press

The Bone Thief by Breeana Shields (Bone Charmer #2)
“Their search leads them across Kastelia and brings them to a workshop housing a vast collection of horrors, including the bones Latham stole from Gran, and the knowledge that the future isn’t all that’s in jeopardy—but the past as well.” – Page Street Kids

The Jewel Thief by Jeannie Mobley
“If she fails, this night may very well be her last. Though, death wouldn’t be her worst fate. Because recording Juliette’s confession is René, a court-appointed scribe, and the man she loves. But René holds his own grudge against Juliette, and this is her one and only chance to win back his heart.” – Viking Books for Young Readers

The Unstoppable Wasp: Built On Hope by Sam Maggs
“She’ll need the help of her genius G.I.R.L. (Genius In action Research Labs) squad and found family to save herself and (not to be too dramatic) the entire world as we know it. Along the way, Nadia discovers that when she teams up with the people who love her the most, they’re totally Unstoppable. Just another day in the life of your way, way above average teenage Super Hero.” – Marvel Press

One thought on “New Young Adult Speculative Fiction May 2020”